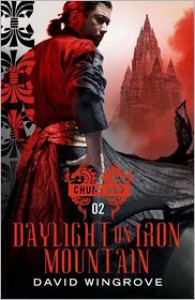 The second of the prequels to the original, and now rewritten, Chung Kuo series. This series is probably the most ambitious I’m aware of in future world-building. China rules everything in a way which makes Orwell’s Oceania look like dictator day-camp. Though not nearly comparable in nuance to 1984, Wingrove nevertheless designs a sprawling dystopia.

This is more epic writing than character driven. Characters slide in and out of the story for their significance to the plot more so than to drive it. Which is okay as long as you go into it expecting it. I never read the original series, so things may change once out of the prequel novels, but so far it seems like a massive attempt to imagine an over-the-top, Chinese dominated future. Firefly fans can think of this as backstory.

As a side note, though it probably won’t matter to most, Wingrove chooses to use the Wade-Giles spelling instead of Pinyin when he incorporates Mandarin into the story. It seems oddly anachronistic to use an outdated spelling for a book about the future. It’s surprisingly distracting.