For the Hell of It: The Life and Times of Abbie Hoffman 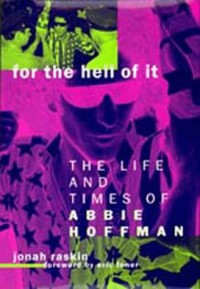 Raskin does an admirable job sifting through Abbie Hoffman’s life to get past the legend and to the man. Many of the stories, exaggerations and blatant lies were created by Hoffman himself in his effort to dramatize his life and the movements he joined. He recreated himself often and convincingly which makes Raskin’s task that much more impressive.

Regardless of what you think of Hoffman, he had the showmanship, the savvy and the moxie to bring media attention to his causes. Whether he deserved it is another matter.