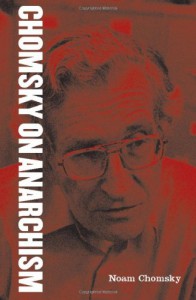 Having read half of Daniel Guerin's No Gods, No Masters, last summer (and plan on reading the other half this summer), Chomsky brings much needed articulation as to anarchist theory in post-industrial society such as ours. Most of my previous reading on anarchist thought is limited to the 19th century Russian anarcho-syndicalists Kropotkin and Bakunin. Chomsky's essays, especially his more recent toward the end of the book, provide inspiration as to practical approach in bringing anarchist thought in into the 21st century.

As I flip through the marred copy of my book, I'm trying to figure out which among the heavily underlined passages would serve best to give a flavor of the book in a review. To start, Chomsky's quote by Rudolf Rocker in Preface to Antologija Anarhizma (1986) best summarizes the basic premise behind anarchist thought:

"Democracy with its motto of equality of all citizens before the law and Liberalism with its right of man over his own person both were wrecked on the realities of capitalist economy," Rocker correctly observed. Those who are compelled to rent themselves to owners of capital in order to survive are deprived of one of the most fundamental rights: the right to productive, creative and fulfilling work under one's own control, in solidarity with others.

For Chomsky, predatory capitalism is no longer a fit system that can meet human needs which must be addressed in collective terms. Language and Freedom.

Nothing terrible radical nor complicated about this idea. But most things in life can be expressed simply. And that's one of the more appealing aspects to this collection of essays. It's accessibility is intentional. In Anarchism, Intellectuals and the State, Chomsky, the linguist, plainly lays out the first obstacle to productive discussion on topics such as political theory:

One of the things that intellectuals do is make them inaccessible, for various reasons, including the reasons of domination and personal privilege. It's very natural for intellectuals to try to make simple things look difficult. It's like when the medieval church was creating mysteries to maintain importance... But these are the ways in which contemporary intellectuals, including those on the Left, create great careers for themselves, power for themselves, marginalize people, intimidate people and so on. In the United States, for example, and indeed much of the Third World, lots of young radical activists are simply intimidated by the incomprehensible gibberish that comes out of left-wing intellectual movements- often radical feminists or this or that- which is just impossible to understand. It makes people feel like they're not going to do anything because, unless I somehow understand the latest version of post-modern this and that, I can't go out in the streets and organize people, because I'm not bright enough. It may not be intended this way but the effect is a technique of marginalization and control and self-interest. Because the people themselves become prestigious and travel around and live in high circles and so forth.

A common complaint, but this is not an anti-intellectual rant. There is no derision of intellectualism. Simply frustration with insincere communication about ideas. Shortly afterward, Chomsky speaks about his ability as a linguist professor to engage in conversation in plain terms regarding his study as well as his colleagues who teach physics. In comparison, he questions whether those specializing in Derrida could do so with obfuscation. The entire idea behind the "project of liberation" must occur within ourselves and discourse first. First we have to feel empowered to speak about the ideas we want to see in action.

Chomsky also draws on lessons from the women's movement as an example for developing anarchist values. Interview with Barry Pateman. Just as the early feminists used consciousness-raising groups to bring out the oppressive elements in their lives that may not have been perceived clearly, so can the same tactic apply to all in regards to oppression by the State. An effort to understand the extent of our limited freedoms must cut through the indoctrination that has turned us into "passive consumer(s), a person who pushes a button every couple years and is taught that that is democracy."

However, his idealism is tempered by common-sense. Chomsky rejects radical steps fueled by slogans that work against the ultimate goal of anarchism.

[T:]he state is an illegitimate institution. But it does not follow from that that you should not support the state. Sometimes there is a more illegitimate institution which will take over if you do not support this illegitimate institution...anarchists can't seem to understand that they are to support that. So they join with the ultra-right in saying "Yes, we've got to minimize the state," meaning put more power into the hands of private tyrannies which are completely unaccountable to the public and purely totalitarian... In fact, protecting the state sector today is a step towards abolishing the state because it maintains a public arena in which people can participate, and organize, and affect policy, and so on, though in limited ways. If that's removed, we'd go back to a [...:]dictatorship or say a private dictatorship, but that's hardly a step toward liberation. Anarchism, Intellectuals and the State (1996).

The anarchist does not require the complete dissolution of authority, simply that "any structure of hierarchy and authority carries a heavy burden of justification..." Goals and Visions (1996). Though at times it seems we tend to believe so, the existing power structures are not immutable nor something which arise out nature.

However, that does not mean Chomsky has created a doctrine upon which society should form itself. When opponents of anarchist values demand an alternative to current structure, they are displeased. In recent history, the Leninist model of socialism has been touted as the alternative to capitalism. Such propaganda ignores the prediction of the "red bureaucracy" that Bakunin warned would be "the most vile and terrible lie our century created." Preface to Antologija Anarhizma(1986). Such socialism is not the pre-determined end result of collective action.

Yet many will still discount anarchist value because if there is no outline nor blueprint upon which these values are enforced, any anarchist vision is presumed to fail. However, in some ways, that is asking a medieval serf to explain in detail representation in a constitutional democracy. Such detail is lacking because of our collective inexperience with collective governance. Chomsky believes attempting this kind of grand overhaul is not the most effective form of implementing anarchist values:

we should be cautious in trying to sketch out the nature of the future society in too much detail. It's not that it can't be done. It can be done in interesting and different ways- and it has been done- but I think the real question is to what extent is it important to do it and to what extent is is it important to just try and experiment and chip away at existing structures? Interview with Barry Pateman.

Ultimately, though there is a large gap between "what we grasp with any confidence and understanding" and "what we must establish to ground the choice of action", we do know some things. Chomsky believes we have an instinct for freedom. An instinct that has a rich tradition. And though "science takes its halting steps toward establishing truths about human nature, and philosophy seeks to establish the connection [...:] between human nature and rights deriving from it", we cannot hold social theory and action in abeyance. Chomsky helps articulate, in fragmented form, many of the values rooted in ourselves that simply need to be defined. The real question is whether we are willing to embrace those ideas.