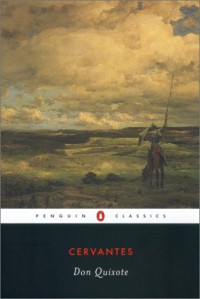 But it’s actually Sancho Panza who is the more interesting of the two. Beginning as an opportunist sidekick, he evolves into a sympathetic hero. Gullible and unheroic as he is. Cervantes seems to have more affinity for the peasant Sancho than Don Quioxte and the latter’s naïve attempt to live the chivalric code.

The humor and style is reminiscent of Rabelais, though I’m sure people that really know literature would ridicule that comparison. Don Quixote is mostly episodic, but the psychological evolution of the characters represent a turning point and is one of the reasons this is considered the first modern novel. It’s hard to be critical of book that takes such a place in the Western Canon.

Even though I didn’t enjoy most of it as much I was hoping, there are many gems. Beyond charging at windmills. My favorites, surprisingly, were the more serious lessons that Don Quixote advises Sancho on governorship. Though words of a madman, the chivalric ideal shines despite Cervantes’ desire to make a mockery of them.

When a guilty man comes under your jurisdiction, remember that he is but a wretched creature, subject to the inclinations of our depraved human nature, and insofar as you may be able to so without wrong to the other side, show yourself clement and merciful; for while the attributes of God are all equal, that of mercy shines brighter in our eyes than does that of justice. Chapter XLII