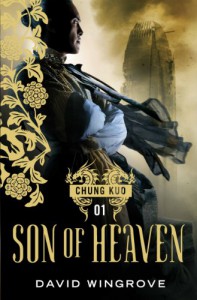 I never read the original Chungkuo series. There were 8 books released from 1989-1999. Apparently, in true Lucasfilm form, Wingrove was not content with the original series and has expanded the series and is now in the process of releasing the remastered Chungkuo edition. Over half a million words in twenty books to be released by June, 2015.

Son of Heaven clearly sets the stage for what’s to come. It’s a well-balanced mix of introduction to the characters and the near-future. Wingrove’s imagined world-destruction and world-building seem a little far-fetched (especially the futuristic database marketplace), but, if you go into it with enough suspension of disbelief, it’s an enjoyable introduction.

It’s intriguing enough to make me check out the second book.