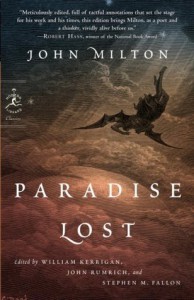 The Greeks have Homer, the Romans have Virgil and the Christians get Milton. Agamemnon sought the fall of Troy, Aeneas founds Rome but Satan falls from Heaven, founds Pandemonium and makes mankind fall from Grace. Epic poems don’t get much more epic.

Milton incorporates classical mythology into Hell’s demonic pantheon. Dense like Dante, Paradise Lost can be a subtly classical education in itself much like The Inferno. The Modern Library edition is heavily footnoted and provides the references needed to really appreciate the work. I went back and forth from obsessively reading the footnotes to ignoring them. It’s important background, but sometimes you just got to let Milton flow.

Satan is, of course, the (morning) star of the poem. The beginning has the same defiant, self-important tone which gets countless college freshmen ignored every day. His resolute dedication to pride over submission is almost Greek tragic. He knows he can’t win. He knows he’s lesser without God than with, but he refuses to submit. And that’s why he’s so captivating. Everyone likes the underdog.

The poem began to lose me as it went on. The devil becomes more petulant, God becomes more boring and Milton becomes more moralizing. The last couple of books are little more than a Cliff Notes version of the Old Testament. By the end, Milton demonstrates his point that the desire to know God is the root of ultimate sin and the key to grace is accepting God, not knowing.

Even if you don’t agree, it’s epic and erudite and worth reading. Plus, for metalheads everywhere, it’s the inspiration for Danzig’s Black Aria. So read and rock.